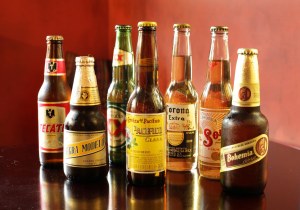 “Una cerveza por favor” is usually the first thing most tourists request when they land in Mexico. Well, that is, right after they have ordered guacamole.! While Mexico is not the beer making capital of the world, there are still many good beer choices in a variety of flavors. You might want a lighter beer such as Corona or Sol. Or maybe you prefer a lager such as Dos Equis. Dos Equis also has an amber option. Then of course, there is Modelo, Pacifico and let’s not forget Tecate. Victoria is also a great beer with a slight bitter taste which until recently was only available in Mexico. In fact, even now, it’s only found in a select few American cities.

Of course, to go along with your beer choice, you must have some salt and lime..!! Now you really feel at home and relaxed on your Mexican beach. However, if you really want to feel like a local, next time you order a beer ask for a chela.! Chela is a popular slang term for beer in Mexico.! In fact, instead of ordering margaritas for the next round – order some cheladas or micheladas. They taste just as refreshing on the beach as the margaritas and they are harder to find outside of Mexico.

A chelada is a mixture of lime juice, ice, beer and salt on the rim of the glass. Usually when you order one, you receive a glass filled one-third with lime juice, ice and the salt. Your beer is on the side for you to fill at your leisure and taste. You can have any beer that you like for your chelada. There is no incorrect choice. When I first moved to Mexico, I usually had Sol or Corona. But I ended up preferring Dos Equis and Victoria at the end. Also notice that the word chelada is a play on two words – chela and helada. Therefore, it literally translates to cold beer..!! 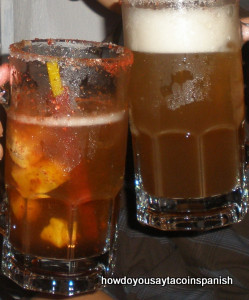 A michelada is a little bit more complex. It also comes with a beer of your choice usually on the side. However, the inside concoction has many varieties. The usual suspects include lime juice, Tabasco or another type of hot sauce, Worcestshire sauce, soy sauce, powdered chilies, tomato juice or clamato juice and ice. Sometimes, you will get tamarindo wrapped around a stick in your michelada (see picture above). Yummy..!! Some micheladas come with shrimp similar to a shrimp cocktail but in liquid form so it’s like a meal and a drink all in one..!! 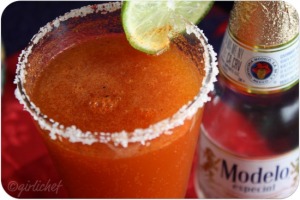 The drink is a little spicy but oh so delicious..!! Of course, you can doctor it up to make it more or less spicy depending on your personal flavor profile. Notice once again, that michelada is a makeup of three words – mi, chela and helada. So michelada translates to my cold beer..!! How cool is that?! So the next time you find yourself in sunny Mexico and you go to order a cerveza, remember to think like a local.! Look up at your masero and proudly say with a smile, “Una michelada porfa.” I promise you will be saying, “mmm, me gusta“, in no time at all..!!