In March of 2010, I took my last class for my master’s program. Luckily for me, that last class was also a study abroad trip to Chiapas, Mexico. While we were in Chiapas, we learned about sustainable growth, indigenous rights and the history of Mexico. We met with many groups, toured non-profit organizations and visited some villages. And of course, we ate some great food – moles, tacos, chicken, etc. And we drank some wonderful coffee as there are many coffee farms in Chiapas.!

One of the villages that most stands out for me during that trip is Nuevo Yibeljoj in Chiapas, Mexico. The town is in the highlands of Chiapas and in 2010 had a population of 595 residents. The town’s inhabitants are Tzeltal or Tzotzil speaking indigenous peoples. Many of the residents have small coffee farms in what can only be described as their backyards. The town belongs to the coffee cooperative Union Majomut. This is the reason I really enjoyed the coffee here. It was straight form the farms to the roaster to my coffee cup.! I promise in Wednesday’s post to speak more about the town, coffee and the coffee cooperative. 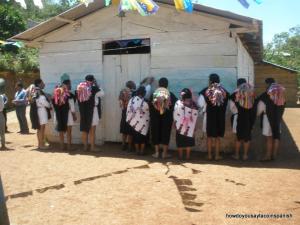 But today, I just want to describe the initial moments of that visit. We arrived at the town and were greeted very warmly. Eventually, our entire group was led to the building where all of the town’s ceremonies are held. There was a ritual performed before we entered and only aduts were allowed inside. The meeting was held in Tzeltal or Tzotzil (not sure), Spanish and English. However, while the meeting was very interesting, what soon caught most of our attention were the little kids from the town peeking through the wooden boards of the building.!! 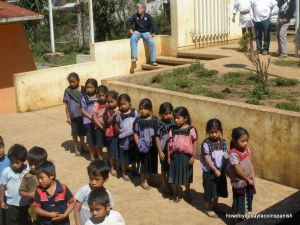 I was able to capture what I believe is the best photo of this “peeking” because I was sitting the closest to the children who were outside. It was so precious.! And delightful.! As with all children, they were so curious to see who these strangers were (us – the students) and wanted to watch our every move. Later on, we went to the school and the children sang for us which was also truly amazing and inspiring. I have often wondered which of the children’s eyes I captured that day. But that will continue to remain one of life’s mysteries….. 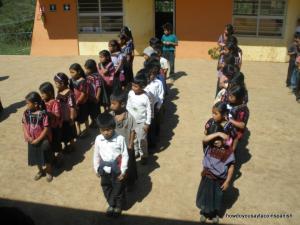 One thought on “esos ojos”