During my early days in Mexico, I spent my time feverishly hunting down lemons. Don’t get me wrong, I love limes..!! They are great in key lime pie, on my tacos and in cervezas..!! But every once in a while, I would want a lemon. Sometimes, I wanted to make Greek lemon potatoes or lemon chicken or even lemonade. So I would meander down to Wal-Mart, or the Mega grocery store or even the fruit and vegetable market, DAC. I would wander around the store aimlessly and without success seeking lemons. Finally, I would locate a store employee for assitance.

Me – Perdone, ¿dónde están los limones? Where are the lemons?
SE – Son cerca de las naranjas. They are near the oranges.
Me – Ok, gracias. Ok, thank you.

At which point, I would head over to the oranges and only see limes..!! I would return back to the store employee…

Me – Umm..perdone. Esas son las limas. Umm..excuse me. Those are limes.
SE – No señora, esos son los limones. No ma’am, those are lemons. 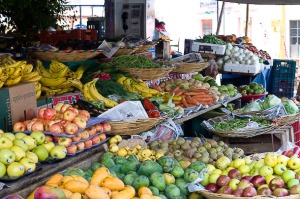 At which point, I would smile and mutter gracias and walk away. I cannot even begin to enumerate for you the countless times this exchange occurred until I finally just gave up. Uncle, I yelled..!! There were no lemons in Mexico.! And if there were any lemons, there was a monumental conspiracy to keep them away from me.! Interestingly enough, all the research that I have done on the matter has in no way enlightened me. I am just as confused, but more accepting.

The first thoery posits that there are very few lemons in Mexico. The lemons that are produced are either exported or used primarily for lemon peel oil. Some theorists suggest environmental conditions may play a role in the limited supply of lemons. Also, lemons are very rarely grown as fresh fruit in the Latin American market. The motive for this lack of production may be the lime’s status as a major commodity in Latin America, and Mexico specifically. The lime is usually used for similar purposes as the lemon.

The second theory proposes that besides the botanical issue, there is a linguistic quirk regarding the etymology of the word lemon. Apparently, limón is chiefly used to refer to limes in Mexican Spanish. However, in the Yucatan, the regular Spanish word for lemon which is lima is also used to describe limes.!! Ok, now I’m really confused..?! Can you see why I gave up? So, all along in the grocery store whether I was asking for limónes or limas, I was really asking for limes.! Wow.!

So then, how do you ask for a lemon in Mexico.? According to Rick Bayless, author of several prominent Mexican cookbooks and restaurateur extraordinaire, they are called limónes reales or real lemons.!! At this point, I’m laughing. And on the floor. jajajaja… Who knew.?! Mr. Bayless also points out that he has only seen these real lemons sold in the northwest of Mexico, which of course is nowhere near Quintana Roo.

Amazingly enough, I learned to survive without lemons. I made chicken or tilapia with lime and cilantro. Instead of lemonade, I learned to love jamaica té or hibiscus tea. Not having
access to lemons opened up my world and expanded my cooking abilities. In fact, I also learned how to chuckle in the produce section every time I heard a new gringo/a ask the same question with frustration. I had been liberated from my lemon quest.!

And it was divine..!! I learned to appreciate a world where the lime reigned supreme. It was either that or go home. And after all, just like the Gershwins’ tune, “Let’s Call the Whole Thing Off”,

‘But oh, if we call the whole thing off
Then we must part
And oh, if we ever part, then that might break my heart’

And as you all know how I feel about Mexico, I stayed. And I learned to say limóne, while you say lemon 🙂