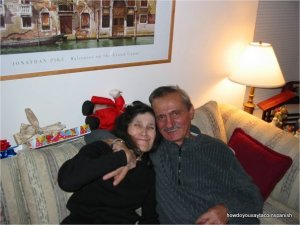 my mom and dad – one of their last photos

It was my mother’s birthday the other day. She would have been 67 years old. And of course, Thanksgiving is around the corner. This time of year, I find myself thinking about her on a fairly regular basis. But it is no longer in sadness that I think about her. I am now able to remember all the good memories and enjoy the remembering. I believe Mexico helped me a lot with that. I know what you are thinking, “Rose, how could a whole country heal you?” Well let me share….

When my mother was pregnant with me, my parents decided on baby names. If I was a boy, I would have taken my grandfather’s name, Tom, or Tomislav. If I was a girl, my name was going to be Maryann or Mariana because my mother really liked that name. There was no reason other than that.! However, on the way to the hospital, while my mom was having contractions, my father pulled a fast one on her.! He decided my name would be Rose, or Ruža, after his youngest sister.!

Really dad.?? And my mom having just given birth to me, agreed with my dad. And so Mariana became my middle name. I have never really liked nor not liked either of my names. But subconsciously I must have had an issue with it. When I was five, I kept telling all the neighbors my name was Lisa. My parents couldn’t figure out for the longest time why everyone in the neighborhood kept telling them how delightful their daughter Lisa was to be around. They thought there must be some ‘lost in translation’ moment. But no, it was me just being difficult 🙂

my mom pregnant with me

As I grew up, I also began to wonder why children only take their father’s last name. Why was the mother’s last name not important.? I watched all the stories about the Kennedy’s and other wealthy people who did take on both of their parents names.! And I longed for an egalitarian family like that.! Though in reality my mother’s last name was a tongue twister complete with many harsh sounding consonants while my dad’s was more user friendly.

me and my mom

Then another interesting event occurred. At my last hotel job, during my initial paperwork, my first names became switched. So all of my paperwork at the hotel listed me as Mariana Rose, including my email. Everyone at the hotel called me Rose or Rosa still, but all of my documents were listed in the opposite manner. When co-workers would look for my email account, I would have to tell them it was under Mariana which of course produced a conversation.

Therefore, on a daily basis, my mother was ever present during my time in Mexico – through the first name she almost gave me at my birth to the last name which had always hovered in the background in the states. Being in Mexico ended up being more than a journey of coffee and work, but also a way of remembering and honoring my mother through her names 🙂 And with that rememberance came healing.