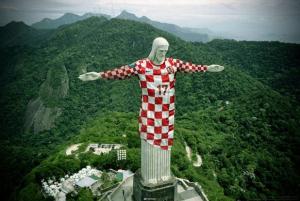 Today is the first day of World Cup 2014.!! And I am super excited because Croatia is playing the opening game against Brazil.!! How spectacularly awesome 🙂 And albeit, a little scary too, since Croatia did not even qualify for World Cup 2010. However, in their World Cup debut in 1998, they finished third.!! I’m hoping for a similar end result this time around.

Soccer holds a special place in my heart because as long as I can remember, I’ve been going to soccer (football) matches with my father. But the World Cup has an even greater hold on me because it reminds me of my first year in Mexico. I will tell you all about that trip tomorrow.! Until then, please enjoy this video supporting the Croatian soccer team. And let’s bring it Croatia.!!!