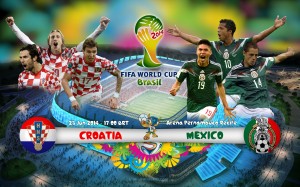 The bad thing about having surpising loyalties, is that sometimes it can cause divided loyalties. My birthday was on Monday and I had a marvelous time of it. But I have to say the two hours Croatia played Mexico during the World Cup, I bit off my fingernails and fingers.!! Plus everyone kept asking me who I was rooting for because apparently it wasn’t clear to anyone. While, I am Croatian by ethnicity, I have strong ties to Mexico. 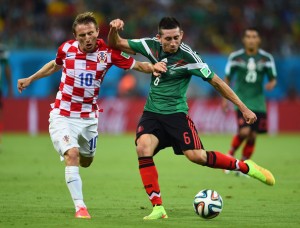 Luka Modric of Croatia and Hector Herrera of Mexico courtesy of zimbio.com

However, I decided the moment that I heard Croatia was playing Mexico on my birthday, I would root for Croatia.! Even though one of my friends accused me offline of really rooting for Mexico.! jajaja… But in all seriousness, it was a tough game to watch. I love both countries.! Regardless of who won or lost, I would feel elated for one and heartbroken for the other. But such is life right.? Bittersweet at all times. And that’s exactly what happened when Mexico won. I was happy for Mexico and all of my Mexican friends. But truly sad for all my Croatian family and friends. It had been nice to watch Croatia on a world stage albeit for only a short time.!

I have to admit, I’m not looking forward to the next time my heartstrings are pulled in such a fashion. And that was only a soccer game. I can only imagine the discord in one’s psyche when you have parents from two differing places or people caught up in ethnic strife. I hope the next time my loyalties are tested and divided, it’s because I can’t decide between chocolate and vanilla ice cream.!! No manches.!!