a full moon that is.! Unbelievably gorgeous shot of the full moon Saturday night in Playa del Carmen.!

What a simply gorgeous other-worldly photo of the full moon from my friend P., the photographer.!!! I was unable to get a good look at the full moon here in Chicago this week because of the clouds, but in Playa it looked exceptional.!! Simply magical…

Have a great weekend everyone 🙂

The other night, one of my beloved former co-workers took this beautiful photo of the full moon in playa.! O.C. made my job so much more enjoyable when I worked in Mexico. He always had the latest gossip and knew everything about everyone. He was the go to guy regarding all the ins and outs of our hotel.

When I asked him yesterday if I could use the photo, he replied “Just do it honey, not problem for me.” Of course, it came with smiley kissy emoticons 🙂 After thanking him profusely, his response had me in stitches.!! He replied in our (former) required hotel speak to guests, “Es un placer” or “It’s a pleasure”. jajajaja…

I hadn’t heard those words in forever. We were always proper with the guests when we used it. But with each other, we would try to outdo ourselves with different voices and exaggerated body movements. All those memories came rushing back and made me happy 😀

Oh yes, and the full moon photo was glorious too.!! Have a great week.! 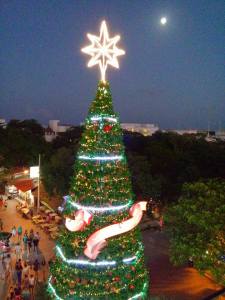 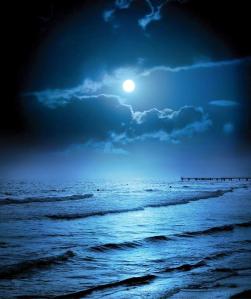 How perfect there is a full moon this Christmas (La Navidad con luna llena).!! Just beautiful. 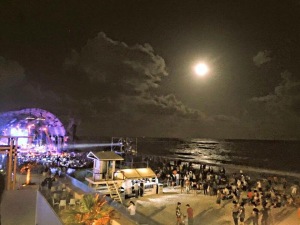 My apologies for being absent. It’s been a hectic time for me these past few weeks. But I’m back with more wonderful photos and tearjerker love songs.!! So enjoy paradise 🙂

with a lunar eclipse thrown in for good measure.! As of right now, I only have pictures of the supermoon. But I promise if I get any lunar eclipse shots, I will post them 🙂

So last night, the world witnessed a blood harvest supermoon complete with a lunar eclipse. Wow.! And we won’t see another one for 18 years.!! Double wow.!! But what exactly does that mean.?! Besides that it’s gorgeous.! 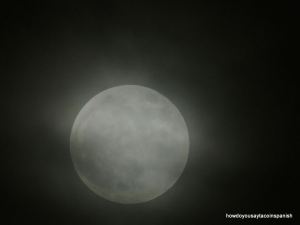 The reason it’s called a harvest moon is because it’s near the Autumn Equinox (September 23rd) when farmer’s utilized it’s presence for (you guessed it.!) the harvest. 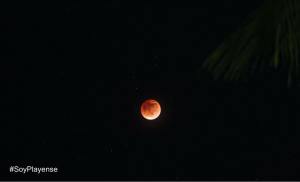 The blood moon moniker comes from the lunar eclipse. Last night, the Earth, moon, and sun lined up with each other. During that line up, the Earth’s shadow completely obscured the moon. But rather than being in complete darkness, the lunar eclipse gave off an orange to reddish haze depending on where you were in the world and other more scientific variables. I’ve also read it’s the name given to the fourth lunar eclipse in a lunar tetrad (four lunar eclipses in a row spaced at 6 full moons/months apart).

One of my good friends in Cancun took these pictures with his wife last night (they wanted to be anonymous). But their pictures were too beautiful to be hidden.! And the blood red moon comes from Soy Playense in Playa del Carmen. So enjoy 🙂

My friend P., the photographer, took the above photos of the full moon.! Isn’t it just gorgeous.?! Did I mention that P. went and bought a camera because of all the love and support she received from this blog for her photos.! Thank you dear readers and fellow bloggers.!! Now P. gets to do what she so dearly loves and we get more photos of beautiful Playa.!! 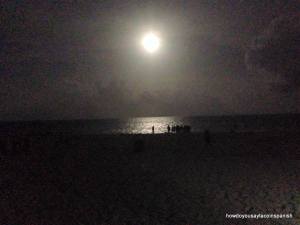 The photo directly above and directly below of the full moon were taken by a former colleague of mine in Playa del Carmen, Ricardo Pincilotti Ezcurra. It’s a little difficult to see even by the light of the full moon, but they are releasing turtles into the Caribbean.!! How exciting.!! And of course, the moon is amazing as usual.!! Gracias Ricardo for letting me use your photos.! And I hope you enjoy your 5 seconds of fame 😀

There was a beautiful full moon last night. The picture above is from one of my favorite beach bars in Playa del Carmen – Zenzi Beach Bar.!! I didn’t get a chance to see the full moon here in Chicago last night as it was covered by the clouds. And then I went to sleep…too tired to say “hola” to the moon 🙂

I also missed the beautiful meeting of Venus and Jupiter in the sky. Hopefully, tonight will be less cloudy and I will be able to see the conjunction. If not, the two planets will meet up again late August.! So I will have to be on the lookout then too. The picture below of the two plants converging is from June 28th, 2015 over Los Angeles. Breathtaking… 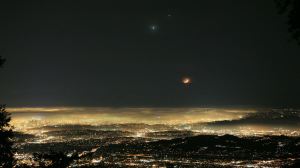 I didn’t forget about the moon last week. Here it is in all it’s lovely glory from last week.! Plus a poem from me 🙂 Enjoy… 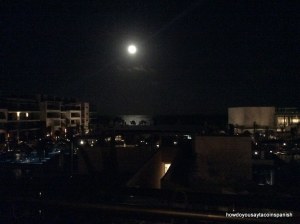 courtesy of my friend AC