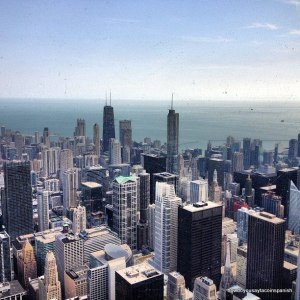 I cannot believe a whole year has passed since I left Playa del Carmen.!! One year ago on February 17th, 2013, I left Mexico and returned to my home in Chicago. The funny thing is that after almost three years living and working in Mexico, Mexico had become my home. In fact, those first few months back in Chicago, I felt like a foreigner in my own country.! I wasn’t familiar with any of the new tv shows. There was a plethora of new restaurants and bars in the city to make me feel like a social outcast.!! And I am always in the know about what’s cool and hip.!

I also felt out of step with the tenor and feel of America in general. Everyone moved faster, talked faster, and was busy with a million and one obligations. The laid back lifestyle I had enjoyed in Mexico dissolved as quickly as the newly fallen snow on my boots when I walked into my heated apartment. It was gone baby gone.!! In the beginning, I resisted. I pined for Mexico. I wept for Mexico. I was homesick for Mexico. Hence, dear reader, the creation of this blog. I needed to write about Mexico if for no other reason than to keep it’s memory alive in my heart and mind and soul. The blog was my catharsis, my anodyne, and my friend. 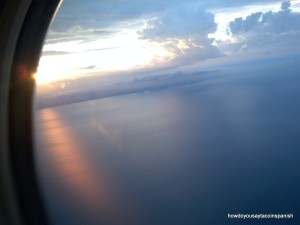 view from my airplane window

And it needed to be all those things because so many changes had occured during my absence. For starters, many people disapproved or did not understand the reasons I moved to Mexico. Some people thought I was going to get killed by the Zapatistas, others by drug kingpins. Other people thought I was moving down there for a boy. And while there was a man, if I had not had the prospect of a job, I would not have gone. Still others didn’t care for my reasons, they just thought it was downright stupid and reckless. Don’t get me wrong, there were many friends who supported me, but they were in the minority.

According to the online Merriam-Webster Dictionary, there are two main definitions for the word prodigal. The first definition refers to a person who “carelessly and foolishly spends money, time, etc.” The second definition is biblical in nature and references “one who has returned after a long absence.” I am sure depending on who you ask both definitions apply to me. However, I don’t agree. I believe only the latter one describes me albeit minus the regretful part which is included in the British version of the definition. 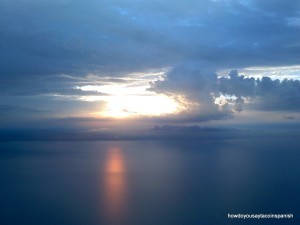 sun setting over chicago from my airplane window

In the beginning, there were days I wished I had never returned. Usually, that was any day it snowed or it was below thirty degrees.!! Which when I arrived in February was a few too many days.! I also wished I had never returned when interview after interview failed to yield me a job let alone a career.! Job prospect after job prospect amounted to the same possibility as a marriage proposal after a spin at one of those 5 minute speed dating events.! Not gonna happen.! I turned to my blog even more furiously to not only stay sane, but to reconnect with my old pal playa 🙂

Of course, there were also days, I bemoaned that I had ever moved to Mexico in the first place.! Maybe if I hadn’t gone, I would have already found a job. Then I reminded myself, it was my inability to find a job in Chicago in the first place after graduation that prompted my move to Mexico. I was only picking up where I left off, drudgingly and painstakingly applying for salvation. I also lamented over my pillaged belongings at the storage facility. I thought, if I had never left, my possessions would never have been stolen. But there is no good to be found in second guessing yourself. So I reminded myself of several very important learnings and blessings. 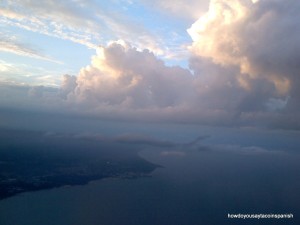 chicago’s coastline from my airplane window

For one, belongings are only possessions. They’re nice, but they don’t make you the person you are. I am not defined by my toaster, or my dishes, or even my shoes. Yes, not even my shoes.! I am not defined by my home. Even though several times I have referred to myself as a glorious hobo because I live out of suitcases with no space to call my own. I am also not defined by my job even though I need money to pay my way through this existence. I am still me without those luxuries. Even Tony Stark agrees with me: “You can take away my suits, you can take away my home, but there’s one thing you can never take away from me: I am Iron Man.” Ahuevo…

What I am defined by is my willingness to change and grow and take risks. And I believe that I accomplished just that by moving to a foreign country by myself, getting a resident visa, and working there. I also learned the language, at least conversationally and enough to be understood. It’s amazing to me how many times I use Spanish here in Chicago in my current position. Learning a new language is a useful trait for life. And it’s a piece of Mexico that I will always retain especially since my Spanish is beautifully syntaxed Mexican Spanish.!

almost home from my airplane window

I am also defined by the experiences I had. I have seen the ruins at Palenque, Tulum, and Cobá.! I have swam with turtles in Akumal. I have seen the sunrise over the Caribbean several times.!! I have lived through Hurricane Ernesto.! I have visited small coffee farms in the hills of San Cristóbal de las Casas. I have dipped my feet into the waters at Agua Azul. I have seen the Angel of Independence in Mexico City.! I have learned some Mayan words – ko’ ox otoch (let’s go home).! I have sailed and sailed on the clear waters of the Caribe. I have seen the face of the moon shine so brightly on me that I called out to her to say hello – “hola luna, soy rosa“.

I am also blessed and defined by all the wonderful people I met.! So many good friends have crossed my path and still reside in my heart. We cried together. We laughed together. We worked together. We celebrated holidays together so far from home. We most definitely drank together.! We shared meals, stories, and heartbreak with each other. How could I now say Mexico was not worth it and that I should never have gone. How could I unmark my heart from these amazing souls I have come to know. I have a whole wonderful group of friends in Mexico whom I am sure will forever be part of my life.! Ojala.! 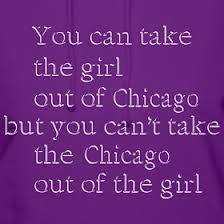 So at the end of the day, dear reader, you be the judge. Am I the prodigal daughter as in careless and foolish.? Or the prodigal daughter as in returned from a long absence.? Whichever one I am, Chicago is currently my home. After a year of residing here, I am becoming more comfortable. I am still not thrilled with the snow or the traffic. But there are many more blessings and opportunities that have occured to make the living here possible. But Mexico, and playa specifically, will always be a siren song away from me. Siempre…