One day in early January, I was on facebook messaging with one of my close friends, P. You will remember P. from my trip to Mexico in September. She was my translator during my shopping around afternoon for attorneys (a blog post I still owe you.!). She was also my fellow reveler during our free tequila shots.! Yippee.! Anyways, we were going back and forth for several hours probably talking about men, and the beach, and crazy situations you find yourself in from time to time. At the end of our conversation, we wished each other good night. Not even several minutes later, she posted on my facebook page the following – eres a Toda Madre! te quiero mucho amiga! 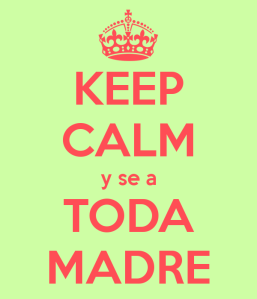 At first, I was confused. I mean I understood the part that she loved me. But was she calling me a total mother.?!? I had never heard that expression before and actually had to google it.! I was too embarrassed to tell her that I did not understand the expression. So according to all the sources, such as urbandictionary.com, toda madre is a Mexican expression referring to something that’s fantastic or really cool. If someone, like your friend P. says to you – eres a toda madre – what they are really saying is that you are great and/or exciting. Wow.! How cool.!

P. and me at Starbucks

What a great compliment.! I want to use it on everyone now.! I mean who doesn’t want to be called great and exciting.?! I know I do 🙂 But to be called great and exciting doesn’t have the same mouthfeel as to be called – eres a toda madre.! That comes with intensity.! And I like intensity.! It’s kinda similar to being called a bad mothafucka.! But without the swearwords.! Or the bad part.! jaja.. And just so you know, my friend P. is a toda madre tambien.! No doubt about it.! So now that all of you have a new expression to use, I suggest that you throw it around at will. I know I’m going to start right now.! My new job is toda madre.! My new apartment is toda madre too.!! jajaja… And you my fellow bloggers and readers son a toda madre tambien.!